“A quartet of genuine substance”

For twenty years, the Sacconi Quartet have been captivating audiences with their unanimous and compelling ensemble, consistently communicating with a fresh and imaginative approach. Formed in 2001, the four founder members continue to demonstrate a shared passion for string quartet repertoire, infectiously reaching out to audiences with their energy and enthusiasm. The Sacconi enjoy a busy international career, performing regularly across the world, at Europe’s major venues, in recordings and on radio broadcasts. The Sacconi are Quartet in Association at the Royal College of Music and Quartet in Residence in Folkestone.

The Sacconis’ prolific recording career covers a broad swathe of repertoire from Haydn to present day. Their latest album featuring world premiere recordings of works by Roxanna Panufnik is just released on Signum Classics. The disc includes the Sacconi’s commission Heartfelt, which was premiered at the Wigmore Hall in September. Releases of recent years include premiere recordings of works by Jonathan Dove, Graham Fitkin and John McCabe. In Damascus, their album of music by Jonathan Dove including In Damascus, commissioned by the quartet, and featuring Mark Padmore and Charles Owen, hit the Classical Top Ten, and was chosen as one of Gramophone Magazine’s Recordings of the Year: “This important release cannot be recommended too highly”. Their complete recording of Graham Fitkin’s string quartets was given rave reviews on Radio 3’s Record Review, in Gramophone Magazine and in The Strad. Their album of three quintets by John McCabe featured the composer on piano in The Woman by the Sea, horn player David Pyatt in the Horn Quintet written for Pyatt and the Sacconis, and Roderick Williams in Silver Nocturnes.

Last season saw the quartet make their debut in Russia with pianist Peter Donohoe, performing Taneyev’s ground-breaking but unjustly underplayed Piano Quintet. They also continued their performances of Dove’s In Damascus with Mark Padmore and Robin Tritschler, as well as giving several performances of their inimitable Beethoven in the Dark. Firm advocates of new music, the Sacconi recently premiered their latest commission from Graham Fitkin, Loosening for saxophone and quartet.  Last season they gave world premieres of new quartets by Judith Bingham (Kings Place), Roxanna Panufnik (Wigmore Hall) and John Woolrich (Little Missenden Festival), and toured with Helen Grime’s string quartet. Current commissions and premieres include Jonathan Dove’s latest quartet On the Streets and In the Sky, a string quintet from Nicola LeFanu and a clarinet quintet (with Mark Simpson) from Robin Holloway.

As the result of a generous grant, the Sacconi Quartet are now Quartet in Residence for the town of Folkestone and its surrounding areas. This is enabling creative collaborations with local artists and projects, and includes an embedded outreach programme, engaging with young string players in the town, and taking creative projects into harder to reach communities in the east side of Folkestone in particular. 2021 will see the thirteenth Sacconi Chamber Music Festival in Folkestone, which is now firmly established among the UK’s major chamber music festivals and attracts audiences from far and near for its vibrant atmosphere and dynamic programming.

In 2015 the quartet launched HEARTFELT, a radical re-interpretation of Beethoven’s op.132 quartet. HEARTFELT pushed the boundaries of chamber music through combining sound, light and touch, for a truly unique performance in which audience members connected with each performer’s heartbeat through holding robotic ‘hearts’. Developed in a unique collaboration with robotics designers Rusty Squid and lighting designer Ziggy Jacobs-Wyburn, and funded by Arts Council England, HEARTFELT received 4-star reviews from The Guardian and The Independent, and was described by the latter as “a powerful way to experience the visceral physicality of Beethoven’s profound thanksgiving”.  www.heartfelt.org.uk

In March, the quartet released an exclusive film of Jonathan Dove’s ‘Out of Time’ on Amazon with all proceeds going to Hands Up Foundation, a young and innovative charity that delivers aid directly and effectively to Syrians in need.

The Sacconi Quartet celebrate their 20th Anniversary in the 2021-22 season, performing Dove’s On the Streets and In the Sky alongside their favourite works from across their twenty years together.  They will also continue to tour with Beethoven in the Dark, their immersive performance of Beethoven’s op.131 quartet entirely from memory, in almost complete darkness. “This stunner from the Sacconi Quartet was all about letting the music speak.  Eyes open or closed, it was all you got.”  Classic FM 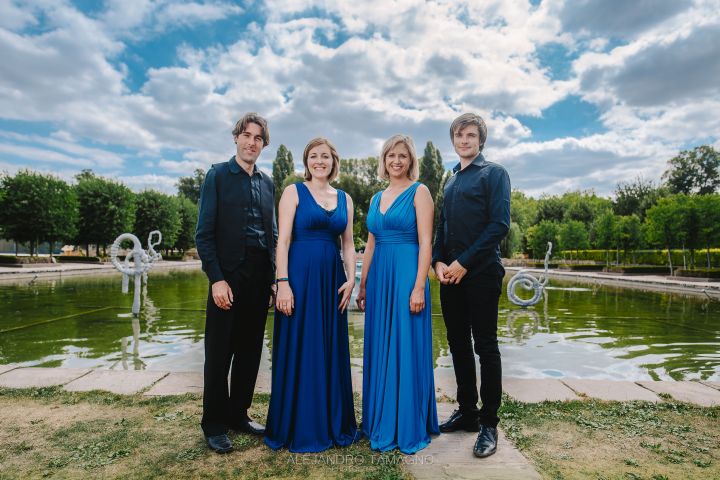 The name Sacconi Quartet comes from the outstanding twentieth-century Italian luthier and restorer Simone Sacconi, whose book The Secrets of Stradivari is considered an indispensable reference for violin makers.

Ben Hancox plays a 1932 Sacconi violin and Robin Ashwell a 1934 Sacconi viola, both made in New York.  Hannah Dawson plays a 1927 Sacconi violin made in Rome, and Cara Berridge plays a Nicolaus Gagliano cello from 1781.  Ben, Hannah & Cara have all been generously loaned these instruments by the Royal Society of Musicians, Britain’s oldest music charity helping musicians in need, for which they are extremely grateful.  Robin is indebted to Ellen Solomon for the use of his viola.